Community Yard Sale – May 20 in Leominster

If you are interested in being a part of the yard sale, please email BRENDA PICCARD-MUÑIZ or call 978-400-0167.

This past fiscal year was another productive year for NewVue Communities.

We would like to thank all those who came out to celebrate.

NewVue elected two new board members, Philip Duffy and Christina DiRusso.
NewVue recognized ReImagine North of Main with the 2017 Community Partnership Award.
Marta Albizu was recognized with the 2017 Luz Sanchez Resident Leadership Award.
Thank you to Rick Healey of Foster-Healey Real Estate for the comprehensive presentation of the housing marketing, nationally and in North Central Massachusetts.

Donuts with Delegates was a forum that allowed staff and residents to talk with our state representative and senators about initiatives that will affect our communities and work.
This year, we had the meeting at NewVue Communities with Representative Stephen Hay and Senator Jennifer Flanagan. 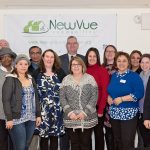 If you are interested in buying a home, learn more through one of our first-time homebuyer classes.

Reprinted from the Sentinel and Enterprise

FITCHBURG — When Brian Taylor purchased a Summer Street property in April, hoping to provide quality low-income housing for families while turning a profit, he was going through his checklist of refurbishing the more than 100-year-old, three-unit property when he realized lead was going to have be removed.

While looking to hire a contractor to do the work, he was alerted that the city had money available to help investors and homeowners delead their properties.

In July, the Montachusett Regional Lead Paint Hazard Control program, which serves Fitchburg, Gardner, Clinton and Athol, received $3.2 million from the U.S. Department of Housing and Urban Development to pay for the inspection and deleading of 150 qualified homes at up to $10,000 each over the course of three years.

Seventy-five percent of Fitchburg homes built before 1978 screened positive for lead, and the screening rate for the city in 2015 was 58 percent, making Fitchburg one of the communities on the state’s “high-risk list for childhood lead poisoning,” said Jenna David, environmental programs director for Montachusett Opportunity Council, a partner in the deleading program.

Since 1978, state law requires any home with children 6 or younger to be inspected and made “ lead safe” by professionals because those children are “ especially vulnerable to lead poisoning, which can severely affect mental and physical development,” according to the Mayo Clinic.

“This work would have been done, regardless of the program, but given that the program was available to me, it was extremely beneficial to me because it is saving me quite a bit of money,” Taylor said. “The other aspect is it really integrates you with the town and helps you understand the priorities of what the city of Fitchburg is about, which is providing healthy low income housing.”

Building owners in Fitchburg who apply for the program must have tenants who live in two bedroom apartments or larger and have a median income below $52,550.

For single-family homeowners, they must have a child under age 6 living in the home or visiting at least six hours a week. The household must have an income below $65,700.

Taylor, a Concord resident and a father of three, said safety of his residents is his No. 1 priority as landlord, and programs like these make it easy to protect families from dangerous conditions.

“If we are going to rent this out to anyone, we want healthy, safe spaces for people, and part of that is making sure there is no lead that is going to create a danger or pose a threat to a child,” Taylor said.

And while Taylor said the process, from applying for the money to meeting with a contractor the city brought in to do the work to the actually deleading of the property, was “seamless,” few others in Fitchburg have taken advantage of the available money.

In Fitchburg, only nine properties have completed the deleading process, said Shannon Erb, the coordinator for NewVue Communities, another partner in the program. There are 15 active cases in the city, she said.

“It has been a little slow going,” said Liz Murphy, Fitchburg’s director of housing and development. “We are not sure why folks aren’t applying. We have gotten quite a few applications, but not as many cases.”

When the city received the money in July, Murphy said the challenge of the program was going to be making sure they reach those residents who can, and should, apply. To do that, the program partners are increasing their outreach. Erb said NewVue, which handles the application process, has been doing direct mailing and holding meetings with various organizations about the program.

“We are hoping as the spring comes in, we increase the number of people who do the program,” said Madeline Mendoza, NewVue Communities’ homeownership program manager. “Overall, it has been positive,” said Mendoza. Homeowners “are grateful for the advantage of this program. They have been grateful and happy with it.”

Taylor is one of those residents — he stumbled upon the program — and he encourages anyone who has concerns about lead levels in their home to apply for the program.

Brian Taylor, owner of 347 Summer St. in Fitchburg, talks about taking advantage of a grant to help remove lead from homes in the city.

Thinking of buying a home. Join us

To Register For A Class